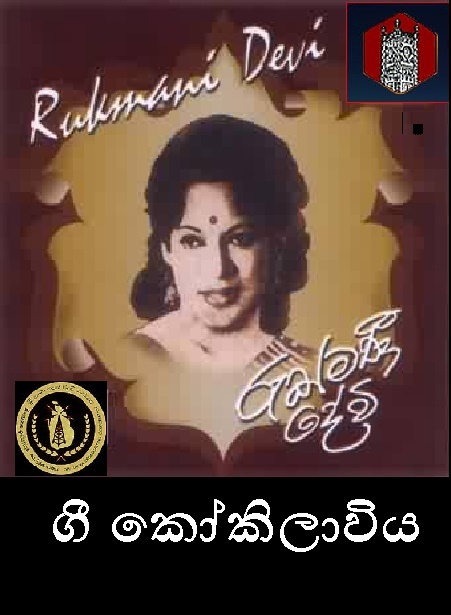 The Golden Voice of Ceylon (Extracted from Wikipedia...)

Rukmani Devi (15 January 1923 – 28 October 1978) was a Sri Lankan singer and actress, who was often acclaimed as "The Nightingale of Sri Lanka".[1] She made it to the silver screen via the stage and had acted in close to 100 films, at the time of her death. Having an equal passion for singing as well as a melodious voice, she was Sri Lanka's foremost female singer in the gramophone era. After her death, she was awarded the Sarasaviya 'Rana Thisara'- Life Time Achievement Award at the 1979 Sarasaviya Awards Festival.
Background
Rukmani Devi, was born as Daisy Rasammah Daniels to a Tamil Colombo Chetty Christian family on 15 January 1923 at Ramboda in Nuwara Eliya, Sri Lanka. Second, in a family of five, her father, John Daniel worked on a plantation and her mother, Helen Rose was a teacher.

She grew up in Colombo and had her early education at St. Matthew's School and then moved on to St. Clare's School, Wellawatte.

As a little girl, Daniels showed an inborn talent to sing and dance. At the age of seven, she was picked to sing Christmas carols. Impressed with her ability to sing, dance, and also to act, she was selected to perform a main role in a Christmas play, 'The Shoemaker's Wife'.

The stage play was trained and presented by St. Clare's School, Wellawatte.

Watching her play this role much enthusiastically, Walter Abeysinghe, a drama producer sought permission from her father, to invite her to play the lead role of 'Sita' in his drama 'Ramayanaya.' Thus, in 1935 at the age of just 12 years she performed in this stage play, presented by the 'Sinhala Natya Sabha'.

She was married to veteran dramatist, actor and singer, Eddie Jayamanne, whom she fell in love with as a result of her close association with him, when performing in dramas produced by "Minerva Dramatic Club" founded by B. A. W. Jayamanne. They lived at "Jaya Ruk", at Angurukaramulla, Negombo.

Career
This marked the beginning of an illustrious career that would span over four decades. As her performances were highly appreciated by the packed audience, well-known dramatist Dick Dias chose her for two of his stage plays, "Jana Kiharanaya" and "Mayawathie". She was now flooded with stage dramas, as she became Mayawathi in Charles Dias' 'Mayawathi', Juliet in a Sinhala adaption of Romeo and Juliet, playing the lead female role in all of them.

With her first audio recording of the famous song "Siri Buddhagaya Vihare" with Master "H. W. Rupasinghe". in 1938,[2] she captured the hearts of the masses and she shaped her career from that of an actress to that of an actress turned singer. This song was recorded to 78 rpm (gramophone) record label HMV with the number N-9300 and issued in 1939 by the Cargills Ltd, local agents for HMV

Her unique voice attracted many music directors, as her singing career moved from the stage to the silver screen.

It was also, around this time that her name underwent a change from Daisy Daniels to the well known 'Rukmani Devi'. There are two schools of thinking as to how the name "Rukmani Devi" originated. According to one school, the late H. W. Rupasinghe maestro created the name, while the other believe that Jayantha Weerasekara and Michael Sannas Liyanage who is in his 90s, created it.[3]

The popular play 'Broken Promise' (Kadawunu Poronduwa), was adapted into a film by B. A. W. Jayamanne. This was the first Sinhala film – Kadawunu Poronduwa, screened on 21 January 1947. Rukmani Devi, who also began her film career through the role of 'Ranjani' in this film, also became the first local cinema actress. Her film career, which thus began spread over a period of more than three decades.

According to Sri Lankeya Cinema Vanshaya (pp 637 – 638) written by Nuwan Nayanajith Kumara, from Kadawunu Poronduwa in 1947 to Ara Soyza in 1984, Rukmani Devi had played different roles in 99 films, up to the time of her death.

Rukmani Devi was also featured prominently on the airwaves of Radio Ceylon, the oldest radio station in South Asia.

Death[edit]
Rukmani Devi, died in a tragic motor accident near St. Mary's Church, Thudella on 28 October 1978. She was returning after a musical show in Uyanwatte, Matara. Her funeral ceremony was attended by a very large gathering; film makers and dramatists, friends, politicians, relatives and her beloved fans.

She was the most celebrated Sri Lankan artiste and a statue in memory of her was erected at the Kanuwana Junction, Ja-Ela, as she still lives in the hearts and minds of the Sri Lankan people. The road on which the Rukmani Devi Museum in Negombo is located was also renamed 'Rukmani Devi Mawatha' by President Ranasinghe Premadasa, on 28 October 1990.

Awards
Best background Singer for the song 'Doi doiya putha' in the film 'Ahasin Polawata' at the inaugural Presidential Awards Ceremony in 1976.
Best actress Award for 'Kele Handa' at the 'Deepasika' awards ceremony conducted by 'Lankadipa' Newspaper in 1956.
Voted Best Actress with a majority of 16,221 votes at the 'Reader's Contest' conducted by 'Dinamina' Newspaper in 1955.

Uploaded by Ranjith The Dhamma Seeker on October 1, 2013